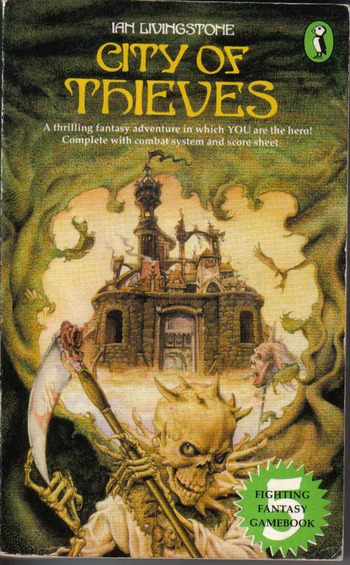 You are a traveler who entered the city of Silverton, where at night the terrified inhabitants gather together in the barricated Inn. You're soon told that the reason are the terrible minions of the demonic Zanbar Bone, a terryfing undead sorcerer who has set his sights on Mirelle Carralif, daughter of the wealthy Owen Carralif, merchant and mayor of Silverton. The people are quaking in fear, and some even suggests giving Zanbar the girl. That's where you come into play: Owen begs you to travel to the infamous town of Port Blacksand, the most wretched and corrupted town in Allansia, to seek the advice of Nicodemus, a reclusive sage who may know a way to permanently destroy the undead warlock. And thus, you'll face a perilous journey through the fetid streets of Port Blacksand, gathering items that will allow you to face the perils of the tower of Zanbar Bone and end its reign of terror once and for all.

City of Thieves follows the traditional Livingstone pattern, having the player looking for several MacGuffin items as he navigates through the city, often facing dangerous and powerful enemies on his way through. This book also introduces for the first time the city of Port Blacksand, which will be used again in many other books, sometimes as a minor background.

Would later receive a Spiritual Successor in Midnight Rogue, another adventure set in Port Blacksand, as well as a sequel, The Port of Peril. Do not confuse with the novel City of Thieves.

City of Thieves provides examples of: