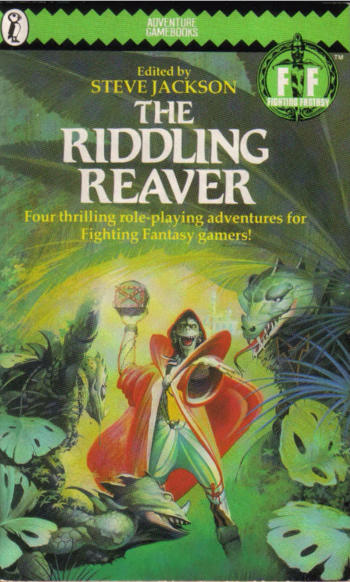 Riddle Me This!
The Riddling Reaver is an opponent worthy of the most daring adventurers. His mind is inscrutable — but there is no doubt about the chaos he plans to unleash on the world. He must be stopped, despite the hazards of the task!
Advertisement:

The Riddling Reaver is a multi-player Spin-Off of the long-running Fighting Fantasy series and a follow-up to "Fighting Fantasy: The Introductory Role-Playing Game".

Up to four players can participate in this game; the Hero, which is the Game Master, who narrates the story for three or more players — each with their own SKILL, STAMINA and LUCK stats — and sets up scenarios, events, and battles for the players on a long, hazardous mission to confront the cunning Riddling Reaver.

The Riddling Reaver works with the basic rules of gameplay set out by Fighting Fantasy. This book will requires the Game Master to be at least a seasoned player of Fighting Fantasy and having access to Titan — The Fighting Fantasy World and Out of the Pit for further information to enhance the gameplay.

The adventure is divided into four "acts":

Act One: The Curse of Kallamehr

The first stop of adventure is the southern city of Kallamehr, previously seen in Slaves of the Abyss, where upon arriving the players discover Baron Bluestone (husband of Lady Carolina Bluestone, previously featured in Abyss) battling the Reaver. Unfortunately, the players arrive just in time to see Bluestone being flung off his tower by the Reaver. The heroes then set off to pursuit the Reaver; but for reasons as-yet unknown, the Reaver seems to be tempting the heroes to follow him, since he left behind clues of his whereabouts in a magic riddle box.

The heroes' pursuit of the Reaver reaches a magic ship, the Twice Shy, decked in Kallamehr harbor. But upon getting aboard, the heroes discover the voyage won't be a pleasant one: the Twice Shy is filled with monsters, spirits, and various traps, all summoned by the Reaver himself.

Act Three: The Pendulum of Fate

Disembarking the Twice Shy, the heroes lands in a beach somewhere in the jungles of southern Allansia. Saving an explorer named Waxley, he became a companion of the players and will direct them to a mysterious shrine housing an artifact of great power. After an intense jungle trek filled with battles against monsters and killer plants, the heroes discover the shrine is actually alive; it's an ancient monster waiting for sacrifices to unknowingly enter its stomach and the artifact, the Pendulum of Fate, is the very heart of the creature. Unfortunately, the Riddling Reaver appears yet once more to steal the Pendulum from the heroes.

Act Four: The Realm of Entropy

The heroes pursue the Reaver to prevent him from using the Pendulum for his own nefarious reasons. His lair, "The Reaver's Roost", is nearby, but this place is not like any other villain hideout the heroes may have come across in past adventures: full of traps, dangers, an ever-increasing army of Replicanths, the heroes braces themselves to stop the Reaver in an intense final battle.

The Riddling Reaver is out of print and rather difficult to obtain a copy these days, but its still readily available on the internet in downloadable pdf form.

The Riddling Reaver provides examples of: