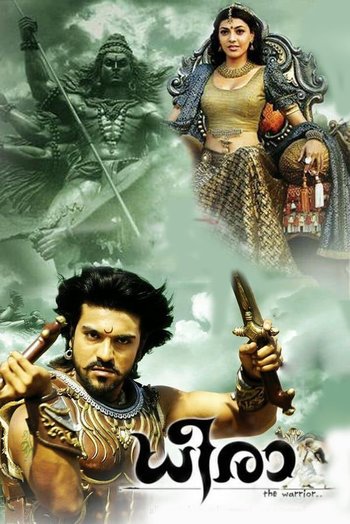 A love story 400 years in the making.
Advertisement:

Magadheera, or The Great Warrior, is a 2009 Indian Telugu-language fantasy action film directed by S. S. Rajamouli. The biggest Bollywood epic ever made at its time (It has since been surpassed by Baahubali) the movie is granted a 1000-day theatrical release, earning itself the title of the longest running South Indian film. Winning the National Award for Best Choreography and Best Special Effects at the 57th National Film Awards, six Filmfare Awards, nine Nandi Awards and ten CineMAA Awards, the movie made its star Ramcharan Teja a household name for fans of modern Bollywood and Indian cinema.

A forbidden love story from 400 years ago is destined to continue in modern-day India; in 1609, the warrior Kala Bhairava and Princess Mithravinda Devi are lovers, but Bhairava must rightfully earn the approval of King Vikram, while the princess' evil cousin, Ranadev Billa, lusts for the princess as well as the throne. After being defeated and humiliated by Kala Bhairava in a chariot race, Ranadev Billa betrays his entire kingdom allowing the neighboring Shere Khan Empire to invade, resulting in the love story to end in ruins.

400 years later, the story continues with Kala Bhairava reincarnated into a biker, Harsha, who fell for the heiress, Indira, the reincarnation of Princess Devi. While both lovers got off on the wrong foot, she eventually loved him back when he saved her from a group of punks, but as fate would have it, Ranadev Billa is reincarnated as Indira's cousin Raghuveer who wants Harsha out of the picture at all costs.

Will the lovers get a second chance after 400 years?