The Kingdom of Lesotho (Sesotho: 'Muso oa Lesotho) is an interesting little country located in Southern Africa. Interesting, because the country is... a kingdom, which is not something that you would normally expect in a continent that saw almost the entirety of its territories being colonized by outside powers for centuries. The monarchy is fairly recent, though, dating back since the 19th century or so. Plus, it's an enclave of South Africa, so it is inevitably dragged through, well, pretty much everything the latter experiences. Basically, they go, we go.

The country, which was previously called Basutoland, became a safe haven for the Basotho under chief Moshoeshoe I, who created a polity in the mountains of Butha-Buthe against Shaka Zulu of the Zulu Kingdom. It was previously much larger, containing a chunk of the Orange Free State, but constant wars with the British, who recently took over South Africa, and the Boers, reduced it to its present territory. Eventually, Moshoeshoe I concluded a treaty with Queen Victoria to make Basutoland a protectorate of the British Empire, though it at times receded from being a protectorate to a colony. This era also saw the move of the capital from Thaba Bosiu to the current Maseru, located at the lowland area in the northwest border with the Orange Free State, which was initially intended to be temporary but later became permanent.

Basutoland gained independence from Britain in 1966 and renamed itself "Lesotho". The ruling Basotho National Party (BNP) initially ruled fairly until the first general election that saw seats being transferred to the oppositions, which caused its leader, Leabua Jonathan, to initiate a crackdown on the oppositions. One of them, the Basotho Congress Party (BCP), began a series of guerrilla warfare, eventually leading Jonathan becoming deposed by the military, who gave the king ‒ then only a ceremonial head of state ‒ executive powers. The king, Moeshoeshoe II, however, was forced to flee the country due to his inclement to autocracy, and power passed to his son, Letsie III. Letsie, though, insisted that his father be reinstated, which was, suffice to say, not a short process, involving yet another military coup. All of this was rewarded with Moeshoeshoe II dying in a car accident while traveling to his farm due to the country's mountainous terrain.

Lesotho returned to multi-party democracy with the election of the Lesotho Congress for Democracy (LCD), a splintered group of BCP, into majority. Despite it being seen as a free and fair election, the oppositions protested into the Royal Palace in Maseru, and that's when things got chaotic. Details aren't known, but apparently, the enforcement of peacekeepers from the SADC (Southern African Development Community), especially the infamous event where South Africa hoisted its flag besides the Royal Palace, was severe enough that the entire country was torn apart, with Maseru being entirely ruined by the end of 1999.

An organization eventually had to be set up to ensure that oppositions get representation as they wished. Since then, there has been uneasiness in the government, particularly between prime minister Pakalitha Mosisili and his deputy Mothetjoa Metsing; the country recently faced a failed military coup in 2014 which forced Mosisili to briefly seek asylum in South Africa.

The country is famous for its highlands and mountains. In fact, the country's lowest point is a freaking 1,400 m, making it the only country on earth with no land below 1,000 m. (However, four other countries, plus Antarctica, have a higher average elevation.) Consequently, it's quite cold there compared to most African countries, and snow is very, very common in winternote Though remember that it's in the Southern Hemisphere, so winter falls in June-August, something that might shock quite a few visitors if they're educated by the Darkest Africa rule. Most of the population reside in the lowlands to the northwest, though, which is where the capital Maseru is located.

Basotho people, who lend the country its name, represent almost 100% of the population, making it one of the most homogeneous countries in Africa. The Basotho are closely related to the Batswana of Botswana and share similar culture, including an affinity for rain. Unlike the Batswana, who have to endure quite a long time in their mostly-desert country before seeing rain, the Basotho are lucky enough to receive it a significant part of the year, thanks to the highlands.

Literacy is very high for an African country (87%) and it is one of the few countries in the world where the female literacy outweighs the males. Females are also well-represented in many sectors of the society, though the country sadly also has one of the highest cases regarding violence against women. However, a quarter of the populations still live below the poverty line. Plus, the recent recession has hit the country hard to the point that some has been advocating for South Africa to annex the country, which the latter vehemently rejected.

Unfortunately, Lesotho has a very serious problem with that disease: HIV/AIDS. Approximately 23.6% are infected, and over 50% of the women under 40 in the urban areas have AIDS. 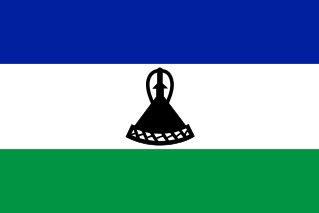 The flag is a tricolor consisting of blue, white, and green colors, each representing the sky and rain (pula in Sesotho), the latter a very important component in the Basotho's culture, as in their brethren, the Batswana; peace; and prosperity, respectively. At the center is a mokorotlo, a traditional Basotho hat