Video Game / The Legend Of Silkroad 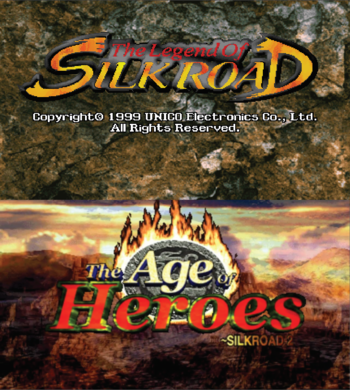 The Legend of Silkroad is a 1999 2D Beat 'em Up arcade action game released by Korea's Unico studios.

A wuxia-themed actioner set in (take a wild guess?) The Silk Road during Ming Dynasty China, the players assume the roles of three warriors - Mun-moo the Korean swordsman, So-Chun the Chinese assassin, and Jamuka the Mongolian barbarian - as they're sent on a quest to rescue a kidnapped Princess abducted on the road and sent over it's borders. A lengthy adventure awaits the heroes on the Princess' trail, as the Silk Road leads them from China to the Middle East and to Rome, with enemies including marauders, beast men, and the undead along the way.

Unico released a standalone sequel, The Legend of Silkroad 2: Age of Heroes a year later, with a new cast of characters.

In the sequel, clans of different tribes lives in peace on the Silk Road, until a ruthless, overly-ambitious overlord named Ba Wang, made a pact with demonic forces to dominate all territories on the road for himself. After initiating a massacre of all the tribes, a band of heroes and survivors, consisting of Kai the swordsman, Shenmue the soldier, Shun the assassin, and Chamuku the wizard, sets out on a quest to overthrow Ba Wang.

The Legend of Silkroad (both games) contain examples of:

Alternative Title(s): The Age Of Heroes