Fanfic / Kitsune no Ken: Fist of the Fox 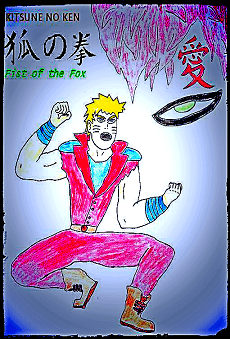 . Both done by the author and submitted under his Deviant Art username, Kyuushin Artist

Kitsune no Ken: Fist of the Fox

is a Naruto fan-fiction written by Neon Majestic (Justice Reaper on this site), the author of Yu-Gi-Oh! Forever. The story is an Alternate Universe Fic, specifically of the High School A.U. variety, and as such there aren't any ninja elements that are so prevalent in the series canon. The story instead goes for a more realistic feel in a modern setting.

Naruto shows up in Konoha Town one day, and stops at the Yamanaka family greengrocery to buy a few gifts for his mother Kushina, with whom he's going to be staying. While there, he runs afoul of members of a local gang, headed by the notorious Mizuki, who is a former member of an infamous group known collectively as the "Kyuushingai" ("Nine Terrors") that spent exactly one whole year, from January 1 to December 31 two years earlier, causing much destruction and panic across the continent. Furthermore, the Nine Terrors' exploits are steeped in myth and legend due to the unreliable and widely-varying rumors and testimonies about their 365-day rampage, but they remain highly feared even two years after their mysterious disappearance.

Only, as it turns out, Mizuki is a big fraud who's merely taking advantage of the fear generated by the stories about the Kyuushingai, in order to bully the locals and extort store-owners. Not only that, but Naruto himself is a genuine former member of the Kyuushingai, with the old code-name of "Kurama the Fox," and he proceeds to wipe out Mizuki and his entire gang just when they're on the verge of burning down the Yamanaka store, the only store that's resisted paying dues to them. Consequently, Mizuki and his people get arrested, while Naruto learns to adjust to life in Konoha Town with help from Ino, whose life he saved during said beat-down of said gang.

That's only the first three chapters.

Thereafter, Naruto settles into life as a student of the local Konoha High School, making new friends and a few rivals along the way, including Hinata, who's the daughter of the local Hyuga Corporation's CEO and who develops a crush on the blond whisker-marked boy, and Suigetsu, a local troublemaker who seeks to get under Naruto's skin from the first time they meet. He also gets to meet some of the other quirky residents of Konoha High School itself, including the perverted math teacher Kakashi and the sexy English teacher Mei.

But Naruto's past isn't about to let go of him just like that...

The story is now complete, at 222 chapters which are divided into 14 arcs, listed below:

There are also the "Kitsune no Ken GAIDEN Chronicles

," a number of chapters with additional material for the story that is not included in the main tale proper but is still canon to the story's plot and timeline.

Now has a character sheet, including material from both the main story and the Gaiden chapters. Character-specific tropes are to be placed on that page to reduce the clutter here.

Also now has its own Shout-Out page.

And now the Shadow Fox franchise has its own page as well. Shadow Fox's character-specific tropes will be relocated there.

Tropes present in Kitsune no Ken: