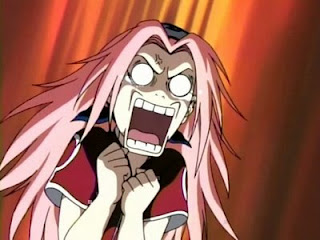 "NARUTOOOOOO!!!"
Elon: Why must you always put yourself at risk like this? We all know how dangerous the forest is! Furthermore-!
Myari: That's easy! I like it when your eyes bug out!
Elon: My eyes DON'T bug out! note Yes. Yes they do.

You see it all the time in manga or anime: During a comical scene, a character may express anger in a way that's meant to incite laughter from the audience.

In such cases, you can expect the character to have enlarged, distorted and oftentimes pupil-less eyes; fangs or otherwise distorted teeth in their mouth; and No Indoor Voice — angry waving of hands or over-the-top violence are optional descriptors. Usually invoked when another character says or does something extremely stupid.

Of course, when anger is displayed in more dramatic scenes, a person's anger will be portrayed (and drawn by the artist) in a much more realistic manner.

Also possible to pull off in live-action works, but also more difficult since the physical distortions aren't as readily evident as in works of animation.

May overlap with Demon Head, where the angry character's entire head expands to large size. Often accompanied by Cross-Popping Veins.

When listing examples, state which characters are most prone to this convention; if it's plot-relevant, note it as such. Western animated works which are inspired by Japanese animation conventions may also be included.

If Arlo is in a bad mood, he looks like this. Eep!

If Arlo is in a bad mood, he looks like this. Eep!