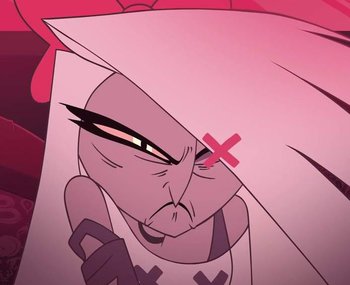 She normally looks prettier than this. We swear.
Advertisement:

Some works strive to make its characters look appealing in every scenario. Others, however, are willing to have normally attractive characters give off shockingly exaggerated facial expressions.

Goblin Face occurs when a character emotes to an extreme degree, making them appear much uglier than normal. The most common traits feature wrinkled skin caused by stretched facial muscles. One may also see Wide Eyes and Shrunken Irises, flared nostrils, and gums exposed over and under the character's teeth. Anger, terror, depression, disgust, and pain are some of the most common emotions that can evoke this trope.

Such facial expressions are normally played either for drama or comedy. This gets used because creators believe that straining the face conveys the emotion better than a more reserved facial expression, showing exactly how much stress the character is under without having to directly explain it to the audience.

Goblin Face is used sparingly by most creators, as it runs the risk of falling into Narm territory if overdone in dramatic works, or becoming unfunny if overdone in comedic ones. It's usually reserved for scenes the show wants viewers to remember most vividly.