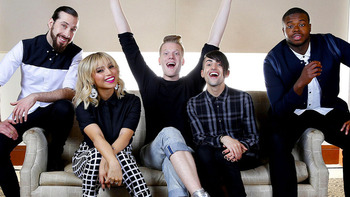 Pentatonix, aka "PTX," are an A Cappella singing group.

Scott Hoying, Kirstin Maldonado and Mitch Grassi grew up in Arlington, Texas and sang in choirs together. They recorded a YouTube cover

of "Telephone" in an attempt to win a "meet the cast of Glee" contest. They didn't win, but when Scott learned about The Sing-Off, they were inspired to audition. With advice from Sing-Off staff member and Scott's college friend Ben Bram, they added Avi Kaplan, the bass singer, and invited Kevin "K.O." Olusola to join them on vocal percussion after seeing his viral "cello-beatboxing" video on YouTube. They won the show's third season.

PTX have released four EPs and two studio albums thus far, while regularly releasing YouTube videos of their music. They have had multiple viral videos, most notably "Evolution of Beyoncé" and a Daft Punk medley which reached 100 million views in November 2014 (one year after it was posted). Both videos received wide media attention as well. Pentatonix has headlined multiple US and European tours and one Australasian tour, and opened for Kelly Clarkson's Piece by Piece tour. They've performed pop, electronic, dubstep, R&B, and hip-hop music in their signature A Cappella style. They're the first Sing-Off alums to have an album go platinum (That's Christmas to Me) and also the first to win a Grammy (for "Daft Punk"), and the first a cappella group to have a No. 1 album in the United States.

In May 2017, Avi announced his departure from Pentatonix

, stating that he couldn't keep up with the fast pace of the group. PTX as a whole took the opportunity to begin premiering various solo projects (typically involving actual instruments): Kirstie as kirstin

, Avi as the frontman of Avriel and the Sequoias

, Scott and Mitch together through their SUPERFRUIT

collaboration, and Kevin via his pre-existing solo act

. PTX nonetheless sold tickets for a Holiday 2017 tour, and later announced that Matthew Sallee, a member of fellow A Cappella group The House Jacks

, would join them for the duration. This was apparently an extended audition, as they officially inducted him as a replacement bass in February 2018.

Members of Pentatonix include (from left to right in the picture):