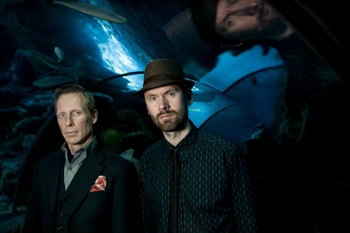 Why hold an album release party in an aquarium? Why not? L: Paul Malström, explorer of worlds both known and unknown; R: James Spectrum, Baron of Sealand.
Anyway, when recording new music, we only have two rules:
1. If it sounds like a sample, it sounds good.
2. The more work you put into a sound or recording, the more you will like it.
— "Pepe Deluxé Album Companion II"
Advertisement:

Pepe Deluxé is a band.

It was formed in Helsinki, Finland, by Jari "James Spectrum" Salo, Vellu "DJ Slow" Maurola, and Tomi "JA-Jazz" Castrén in 1996. DJ Slow left in 2001, and JA-Jazz left in 2008. Multi-instrumentalist Paul Malmström (a New York-based Swedish expatriate) began collaborating with the band in 2003, and officially joined in 2008.

Initially, PD's sound was a sample-heavy fusion of big beat and trip-hop, with traces of psychedelic rock and 60's camp. Over time, the influence of big beat and trip-hop diminished, while that of psych rock increased. Furthermore, PD began recording all the parts of their songs themselves, but constructed their songs to fool listeners into thinking they still used samples.