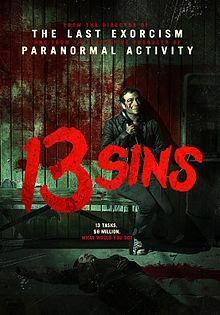 Thirteen tasks. Six million dollars. What would you do?
Advertisement:

13 Sins. also known as 13: Game of Death is a 2014 American Horror-Thriller film, directed by Daniel Stamm, starring Mark Webber and Ron Perlman. The film is a remake of a 2006 Thai comedy horror film 13 Beloved.

Mark Webber stars as Elliot Brindle, a meek and extremely passive man with a pregnant fiancee (played by Rutina Wesley), a mentally handicapped brother (portrayed by Devon Graye), and a dead end job. Shortly after he's fired from his insurance sales job, he receives a mysterious phone call with a ringtone of Entrance of the Gladiators. The man on the line tells him that he's part of a new and exciting game show, and he can win $1000 by killing the fly in his car. He's then offered more money to eat the fly. And then he gets more challenges, each worse than the last, with him only getting the fortune if he completes all 13. Soon, he's too far in to get back out, having committed several crimes, and he learns that there's another competitor, and only one of them can win...

It premiered at the 2014 SXSW film festival and was released theatrically in the United States on April 18, 2014. This was the final film appearance of George Coe before his death in 2015.

This film exhibits the following: