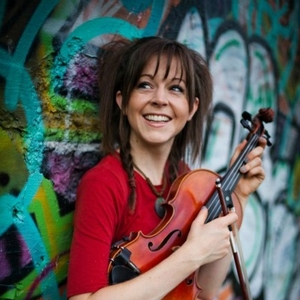 "Have you ever seen a violinist really rock out??"
—YouTube tagline
Advertisement:

Lindsey Stirling (born September 21, 1986) is an American violinist, musician, dancer, performance artist, and composer, usually described as a "dancing electronic violinist". Her music is mostly Instrumental Hip Hop combined with classical-style violin. She has also arranged film and videogame themes and incorporated dubstep in some pieces, e.g. her most popular track "Crystallize".

Shortly after her performance on the fifth season of America's Got Talent in 2010, cinematographer Devin Grahamnote who later became her boyfriend contacted her via Facebook in hopes of making a YouTube video together. A few months later, Stirling replied to him and they scheduled to shoot a music video for her new song, "Spontaneous Me". It was filmed the week of May 9, 2011 while Graham was on a nearby business trip. The video gave a major boost to Stirling's popularity and she began making music videos for her YouTube channel regularly.

, and her vlog/behind the scenes channel, Lindsey Time, can be found here

She frequently collaborates with other artists, including The Piano Guys, Halestorm, and Pentatonix, and has a longstanding friendship with Imagine Dragons.

Her autobiography The Only Pirate At The Party, which she co-wrote with her sister Brooke S. Passey, was released on January 12, 2016.

Tropes found in her music and videos: