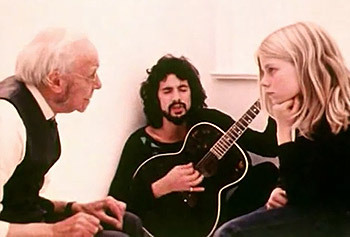 "You're still young, that's your fault
There's so much you have to know"
"Old woman please tell me your tale
Did you succeed or did you fail?
Did you ever reach your destiny?"
— Heather, Crazy Ex-Girlfriend: "The Moment is Me"
Advertisement:

It seems like a lot of songs, particularly in Country Music, involve a character, usually the narrator, talking to an elderly man. Why is this such a recurring theme?

Well, when someone's been around long enough to be described as "old", they've had a lot of life experience, and usually can impart good advice to the listener. Often, the person he's talking to will ponder over his advice, perhaps deciding to change his own life based on it.

A variant often seen in older music (as in, from the Middle Ages onwards) has the old man be the main character (usually the daughter)'s father, disagreeing about an Arranged Marriage or the Overprotective Dad preventing a marriage.

Songs that include this: