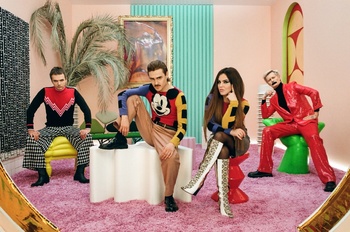 Think of them as the Russian lovechild of Die Antwoord and PSY (left to right: Gokk, Ilich, Sonya, Tony).
Advertisement:

Originally created as a one-time act with their first music video "Everyday I'm Drinking" meant to be nothing more than an April Fool's joke, the band really took off when they were unexpectedly picked as an opening act for the group Die Antwoord later that year and managed to come up with six more tracks in only one month.

The name Little Big didn't come out of nowhere: for the first year of the band's existence, it consisted of vocalist Ilich, DJ Sergey "Gokk" Makarov and two female vocalists Anna Kast and Olympia Ivleva, who were little women, the name of the band being a reference to the band members' differences in height. A year later Anna left the band citing creative differences and the need to shift her focus back on her day job (kindergarten teacher), and the band welcomed two new members: Gokk's bandmate from Jane Air Anton "Boo" Lissov (although as of "Rock, Paper, Scissors", he seems to have changed his nickname to "Tony"), who previously cameoed in the band's videos as an evil clown, joined Little Big as guitarist and backing vocalist, and Sofya "Sonya" Tayurskaya replaced Anna on vocals. Four years later, Olympia quit the band as well to focus on different projects, and the band has remained a quartet ever since.

While their original style was firmly rooted in social satire and grotesque visuals, with time they slowly went Lighter and Softer and especially Denser and Wackier, shifting their focus to catchy melodies and absurdist humor. They gained global recognition in 2018 after their single "Skibidi" became a viral hit on YouTube. In 2020 they were chosen to represent Russia Eurovision Song Contest with their song "Uno". When that year's contest was cancelled due to the COVID-19 Pandemic the band declined to return for the 2021 contest, stating that another act should have the chance to perform instead.

They are the Russian musicians with the most views on YouTube and also provide a heavy presence on social media. While not as visible as the band themselves, co-founder Alina Pasok has directed every single one of their music videos.

As of June 2022, the band have left Russia and are currently based in California, after speaking out against Vladimir Putin and the war in Ukraine.