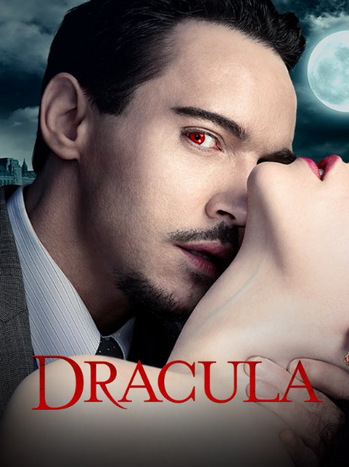 A British-American horror drama television series that premiered on NBC on 25 October 2013. Created by Cole Haddon and starring Jonathan Rhys Meyers as Dracula. Daniel Knauf, of Carnivàle renown, serves as its showrunner.

It's 1896, and the mysterious Dracula has arrived in London, posing as an American entrepreneur who wants to bring modern science to Victorian society. He's especially interested in the new technology of electricity, which promises to brighten the night - useful for someone who avoids the sun. But he has another reason for his travels: he hopes to take revenge on those who cursed him with immortality centuries earlier. Everything seems to be going according to plan... until he becomes infatuated with a woman who appears to be a reincarnation of his dead wife.

The first trailer can be watched here

. A short animated prequel can be watched here

The show was not picked up for a second season, leaving the series on a cliffhanger.

Not to be confused with the syndicated 90s show, Dracula The Series, nor Mark Gatiss's and Steven Moffat's 2020 adaptation for the BBC.