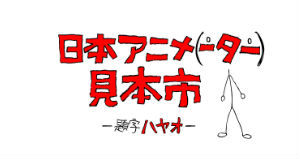 The Japan Anima(tor)’s Exhibition (日本アニメ（ーター）見本市, otherwise known as Japan Animator Expo) is a collaborative effort between Studio Khara, Dwango, and a host of other animating giants to make a collection of unique short films. Headed by Neon Genesis Evangelion creator and director Hideaki Anno, the goal is to “push the boundaries of what animation can do”— in other words, every short just goes absolutely bonkers. From Stop Motion to old production cels, to crazy music videos and Widgets, the Animator Expo aims to push the envelope and not only deviate from regular Japanese Animation, but to use it as a learning experience in animation experimentation from ideas both new and old.
Advertisement:

Interestingly, the Expo is mainly an Internet affair, releasing shorts over a weekly basis. By the end of its run in mid 2015, the Expo released 36 shorts in total, running across multiple anime seasons.

In 2019, the main website shut down; they promised to put the content back up under a new domain, but currently there is no website to point to.

The promotional videos can be found here: PV 1

The Dragon Dentist was adapted into a two-episode (movie length when put together) anime in 2017, which includes an edited version of the events of the short as a flashback.