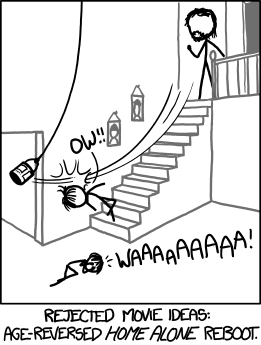 It seems very common for writers to let children hurt adults, especially if it's Played for Laughs and the perpetrators get away with it. On the other hand, any adult who hurts children tends to be seen as evil if said act is done, and tends to suffer Laser-Guided Karma.

One reason for that is that a young child (not a teenager, who is practically an adult) is assumed to be fairly easy for most adults to subdue while doing little harm to the child if the child becomes violent, and there are few parents out there who would want to wreck their children's lives by calling the cops if they already have the situation in hand. Also, while kids can be cruel, they are also perceived as innocent as well as extremely cute, and since adults are considered big and strong and capable, the child is very likely to get away with whatever horrible things they do to adults because not only is it entertaining, we can also fault the adult for being too incompetent to handle a child.

Note that inversions do happen, as demonstrated by the Hilariously Abusive Childhood trope. The Enfant Terrible may be an aversion, but still expect heroes to show more angst about hurting a child than they would an adult enemy who was doing the same thing.

Related to Children Are Innocent and Kids Are Cruel. For a similar application of the logic behind this double standard when both the abuser and victim(s) are minors, see School Bullying Is Harmless. See Would Hurt a Child for when adults DO retaliate, and Hide Your Children, where children are noticeably absent in video games on similar ethical grounds. Can overlap with Annoying Younger Sibling if the child and adult in question are siblings. Compare Kid Hero.

open/close all folders
Anime and Manga
Comic Books
Films — Live-Action
Literature
Live-Action TV
Webcomics
Web Animation
Caillou the Grown Up averts this. While Caillou's deranged behavior is played for Black Comedy, he is rightfully portrayed as being in the wrong for mistreating his parents with his selfish and immature behavior.
Web Original
Western Animation
Real Life