Film / The Strange Thing About the Johnsons 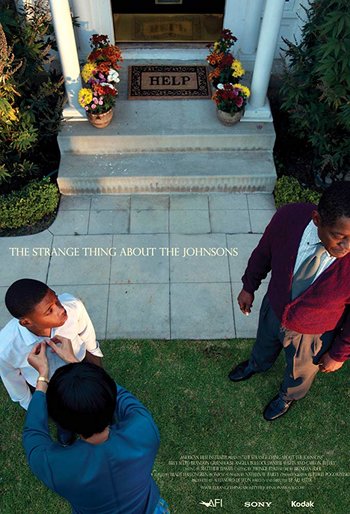 A dark secret lies within this family.
"I love you, Dad… but this makes it hard."
Advertisement:

The Strange Thing About the Johnsons is a darkly satirical dramatic short film written and directed by Ari Aster as his thesis film while studying at the American Film Institute's graduate school.

The film focuses on the eponymous Johnson family: Sidney, a successful poet; Joan, his wife; and Isaiah, his charismatic son. Not much time passes before the film reveals what exactly the "strange thing" about this family is, at which point things quickly go downhill.

It premiered at the Slamdance Film Festival in January of 2011 but gained infinitely more attention following its leaking online in November of that year. Out of the sheer advent of public curiosity towards the aforementioned "strange thing", the film went viral, receiving a polarized mix of reactions from acclaim to disgust.

Undoubtedly one of if not the most popular short of his, it alongside Munchausen (2013) helped Aster get the attention of A24, where his career continued with feature films.

As the film's entire plot hangs on the Wham Shot in its opening, all spoilers are unmarked. It is strongly advised that you watch the short first

, then come back here.

The Strange Thing About the Johnsons provides examples of: