Dog Got Sent to a Farm 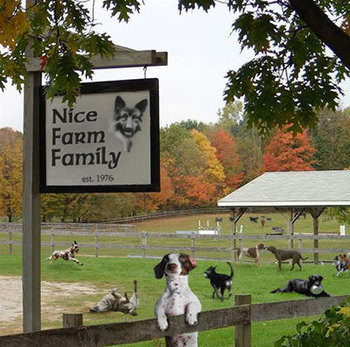 .
Chandler: It's like when you're a kid, and your parents put your dog to sleep, and they tell you it went off to live on some farm.
Ross: That's funny, that, no, because our parents actually did send our dog to live on a farm.
Monica: Uh, Ross?
Ross: What? Wh..hello? The Millners' farm in Connecticut? The Millners, they had this unbelievable farm, they had horses, and, and rabbits that he could chase and it was... it was... Oh my God, Chi Chi!
— Friends, "The One with the Thumb"
Advertisement:

How do you tell a child when their dog has died? The simple answer is, you don't. You just tell them that good old Spot has been sent to a lovely farm with new owners who will take very good care of him. This way, the kid doesn't have to learn about death and his parents don't have to tell him about it. Everyone wins!

The straightest example of this trope applies to pets, but in extreme versions can apply to actual people who have recently died. Of course, at some point, the kid is going to grow up and realize their beloved dog was never actually sent to a farm. This can also apply to cases where the child is told their pet simply "ran away" or something of the like.

Sub-Trope to Lies to Children and Released to Elsewhere. See also Never Say "Die" and Black Comedy Pet Death. Contrast Death by Newbery Medal, which is all about learning about death.

Don't ask why BoJack is a zebra.

Don't ask why BoJack is a zebra.