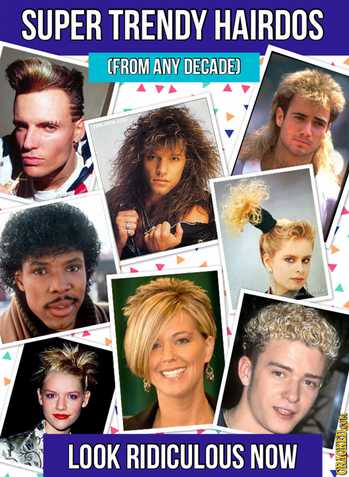 That font! That background! Those Dutch angles! That's so 1992.
"Only very rarely do you have a popular song that, in retrospect, pretty much everyone agrees was absolutely terrible."
— Todd in the Shadows on "Afternoon Delight"
Advertisement:

At some point in time, there was a thing—an individual work, the body of work of a particular creator/performer/artist, an entire genre, a trend in an art medium, etc. Whatever it was, this thing got very, very popular. But at some point, it just got too popular. It was talked about everywhere, with no water-cooler conversation avoiding the subject. It was overexposed until people got bored. It got so much publicity and so many bad imitators that there was plenty of time to notice each and every flaw and dissect them under a microscope. Soon, small insignificant flaws become regarded as unavoidable and unforgivable sins. Sometimes, it just takes a change in sociocultural attitudes for the thing to fall out of favor. The final tell-tale sign is indifference, ridicule, or even downright hatred. Not just for the thing itself, as the people who like it often become the subject of nasty, highly-specific stereotypes. Simply mentioning that someone likes it online, even if meant completely sincerely, is considered trolling.

Five or ten years later, almost nobody will admit that they ever liked this thing, and the only mention in the media will be cheap jokes about the fad. Retrospectives of the time in which it was popular will either point to it as a symbol of everything wrong with that time period's taste in its medium, or quietly skip over it and just pretend it never happened. It may get revived decades later as So Bad, It's Good or by Bile Fascination, but it's unlikely to be popular on its own merits ever again. In fiction (and Real Life), a Disco Dan is a rare admirer who refuses to accept the judgment of history and passionately holds on to the belief that the dead thing is still as big as it always was—usually with comical results.

When all of this has happened, that thing which was once so popular has become Condemned by History. Of course, twenty or thirty years later, the situation may change again. But if not, it will remain either scorned or simply ignored.

Sometimes caused by people saying that It's Popular, Now It Sucks! too much, but not always. At its height, these people usually exist, but are typically not very vocal. It's particularly common with things that never had a cult following to begin with—they went from nowhere to everything, and then back to nowhere, very suddenly. This is essentially Hype Backlash after something faded from popularity, while its haters remained active.

For a more detailed examination of the ways a work can become Condemned by History, see the Analysis page.

Compare Jumping the Shark, "Seinfeld" Is Unfunny, Dead Horse Genre, Fallen Creator, Hatedom, Periphery Hatedom, and Discredited Meme. Contrast Vindicated by History and Nostalgia Filter. Also compare and contrast Overshadowed by Controversy, where uproar sparked by or around a work is better-known than the work itself, sometimes leading to the work and/or creator becoming condemned if the uproar is severe enough. If a single work is perceived as rendering something Condemned by History, it's a Creator Killer, Franchise Killer, Genre-Killer, or Star-Derailing Role. Compare and contrast Unintentional Period Piece, when a work can be precisely dated to a specific era, but it may (or may not) have remained popular up to the present day.

Important note: Real life examples require a 5-year wait before they can be added to the page. A show or other work which is currently in production cannot be an example even if popular opinion has turned against it for whatever reason. This is also not a place to be Complaining About Shows You Don't Like.