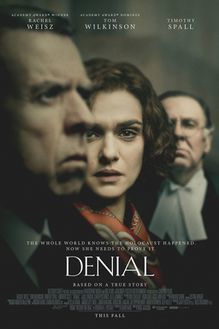 brought against American historian Deborah Lipstadt (Rachel Weisz) - as well as her British publishers, Penguin Books - by British writer David Irving (Timothy Spall) after Lipstadt called him a Holocaust denier and an anti-Semite in one of her books. Since British law places the burden of proof on the defendant in libel cases, Lipstadt has to prove that she did not slander Irving by saying he created false evidence and misinterpreted existing evidence to deny the truth of the Holocaust.

Lipstadt is helped by an ace team of British lawyers, including solicitor Anthony Julius (Andrew Scott) and barrister Richard Rampton (Tom Wilkinson). When Lipstadt wants to testify on her own behalf and bring Holocaust survivors to the stand, however, the lawyers see Irving—who is acting as his own lawyer—as too dangerous a manipulator to allow him a chance at a cross-examination. Outside of the courtroom, the trial also gains a wealth of attention from the media, which spin the cases into a trial about the truth of the Holocaust.