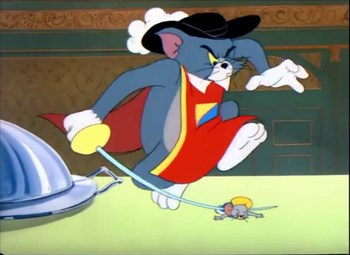 The Two Mouseketeers is a 1952 Tom and Jerry cartoon, directed by William Hanna and Joseph Barbera.

The setting is France at a time period pre-Revolution. Jerry and his little buddy Nibbles (from "The Little Orphan") are the "Mousketeers", who have a talent for stealing the king's food. Tom is a royal guard charged by the king, on pain of his life, to stand watch over the food laid out for a royal banquet. Naturally, Jerry and Nibbles make their way into the banquet room, leading to an epic battle with Tom.

The short proved so popular that it inspired a series-within-a-series, as MGM made three more "Mouseketeer" cartoons with Tom, Jerry, and Nibbles.