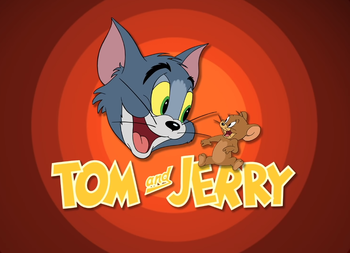 Their smiles in this picture do not reflect the characters' actual relationship.note (Well, mostly.)
Advertisement:

Thomas Cat and Jerry Mouse, the stars of a long-running series of short theatrical cartoons produced by MGM during The Golden Age of Animation, were the first characters created by William Hanna and Joseph Barbera. In the duo's first short, "Puss Gets the Boot" (1940), the cat's name was Jasper and the mouse, though left unnamed onscreen, was supposedly named Jinx by the animators (according to Bill Hanna's autobiography but nowhere else) and called Pee-Wee in a press release from the era.note Hanna and Barbera would later use the name Mr. Jinks for the cat in their T&J Expy short series, Pixie, Dixie and Mr. Jinks.

The characters gained their permanent names after an in-house contest staged by MGM, with animator John Carr submitting the winning entry. Carr may have been inspired by the names of the two young tearaways in the 19th Century Life in London stories by Pierce Egan, or perhaps by the eggnog-like beverage known as "Tom and Jerry" (itself named after Egan's characters), or possibly even by the earlier, human animated duo created by Van Beuren Studios (for which Barbera worked at the dawn of his career) in the '30s. In any event, the Tom and Jerry series went on to become one of the most popular and successful of all time, earning 13 nominations for the Academy Award for Best Animated Short Film and seven wins (including four in a row from 1943 to 1946). The only other theatrical animated series to win as many Oscars was Disney's Silly Symphonies.

After MGM's animation unit closed in 1957, Hanna and Barbera started their TV animation studio. No new Tom and Jerry cartoons were produced until MGM revived the series in 1961, contracting it out to a Czechoslovakian-based production company supervised by American-born director Gene Deitch. Chuck Jones took over from Deitch two years later, returning production to Hollywood and directing new Tom and Jerry shorts for MGM until 1967.

On September 25, 1965, CBS introduced Tom and Jerry to television, broadcasting an Animated Anthology on Saturday mornings featuring the original '40s and '50s MGM shorts; this series ran until 1972. Throughout the rest of the '70s, '80s, and '90s, vintage T&J cartoons ran in syndication, usually alongside Droopy, Barney Bear, Tex Avery's MGM shorts, and MGM's other one-shots, with the duo taking top billing and the others simply listed as "and Friends".

From 1975–77, Hanna-Barbera produced a less violent The Tom and Jerry Show anthology for ABC, supported by a new character, the Great Grape Ape. This was followed by Filmation's 1980–82 version on CBS, which used the classic slapstick formula. Another series, Tom & Jerry Kids, ran on the Fox network from 1990–93. From 2006 to 2008, The CW's animation block included Tom and Jerry Tales, which continued with the slapstick humor of the theatrical shorts, as did a series of direct-to-video films. Tom and Jerry Tales was canceled after 4KidsTV took over Kids WB, but the movies have continued.

Warner Bros. acquired the rights to Tom and Jerry after purchasing Turner Broadcasting System, which in 1986 had purchased MGM's entire pre-1986 library. Interestingly, since then it seems like Warner has been treating Tom and Jerry better than their own Looney Tunes (probably due, in part, to the commercial bombing of Looney Tunes: Back in Action). Until 2017, Tom and Jerry was the only classic cartoon series to air consistently on Cartoon Network. Tom and Jerry has also been the only classic cartoon to air consistently on Boomerang, with the shorts airing since the channel's launch and they continue to do to this very day. Since acquiring the rights to Tom and Jerry, Warner has produced several direct-to-video movies — and Tom and Jerry Tales — which, for the most part, stay true to the classic T&J form. After which came the 2014's version of The Tom and Jerry Show, which is made in Adobe Flash but otherwise continues the usual format of the series.

A feature length Tom and Jerry film was released in 1992. There have also been some direct-to-video feature length Tom and Jerry films released since which are much closer to the premise. For a recap of that part of the filmography, see the Tom and Jerry Direct-to-Video Film Series. Another theatrical film was released in 2021, this one a mix of live-action and animation directed by Tim Story and with Chloë Grace Moretz and Michael Peña as the main (human) stars; for this movie, Tom and Jerry were modeled after their original appearances, to the relief of those dreading a "realistic" CGI makeover. As a tie-in, the team behind the Looney Tunes Cartoons created two brand-new Tom and Jerry shorts exclusively for HBO Max.

Not to be confused with Van Beuren's Tom & Jerry

cartoons (which were renamed Dick & Larry in later home movie rereleases to avoid confusing them with the cat and mouse). Or, for that matter, the musical duo that went by the name "Tom and Jerry" for several years before switching to their real names. Also, despite what their names might tell you, neither Tom or Jerry are British and German respectively.

Tropes found across the franchise:

After being tricked into thinking he's sick, Tom gets back at Jerry until discovering that Jerry himself actually got sick and develops polka-dots all over his body, which causes Tom to freak out and get the disease himself, making them both sick.

After being tricked into thinking he's sick, Tom gets back at Jerry until discovering that Jerry himself actually got sick and develops polka-dots all over his body, which causes Tom to freak out and get the disease himself, making them both sick.