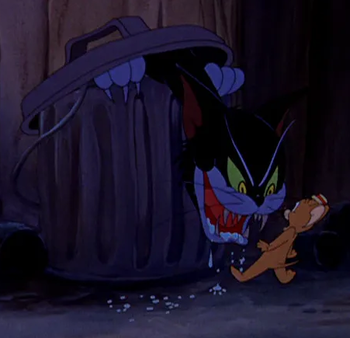 At this point, Jerry thought that being with Tom isn't so bad after all.
The Tom and Jerry shorts (both past and present) are filled with rib-tickling comedic violence, but it is definitely a product of its time — not just with the racial tropes or how female characters are treated, but with how the violence and its implications are represented, which, these days, can be considered disturbing for modern viewers.
Advertisement:
"Heavenly Puss" short where Tom gets sent to Hell, even after getting Jerry's forgiveness (though it turns out that it was All Just a Dream.) That probably scared a few kids rather than amusing them. Matt Groening (the man behind The Simpsons, Futurama, and Life in Hell) even cited this as one of the darkest things he's seen.
Advertisement: