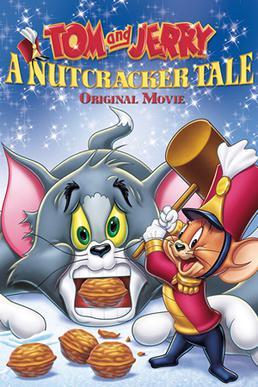 The movie begins with Jerry and his little nephew Tuffy watching the Christmas ballet in New York City, while a group of cats, including Tom, in an alley overlooking the Empire State Building, sing a song for the Cat King. Later, Jerry goes to the empty stage floor, where magic begins to happen. Toys come alive including Nelly the pony and Paulie the Christmas Ornament. A Music Box ballerina named La Petite Ballerina also comes to life thanks to the magic, and Jerry dances with her.

The stage is then transformed into a wintry wonderland, where the toys are enjoying a dinner. Tom hears this and he and the other cats raid the feast, trapping the toys and taking over the wonderland. Jerry, Paulie, and Nelly try to stop this but are stuffed into a can and shot out of a cannon, ending up worlds away. Now Jerry and his companions must venture to reclaim their kingdom from the cats before the sun rises and the wonderland becomes the cats's domain forever.

Tom and Jerry: A Nutcracker's Tale contains examples of:

"King of the Cats, that's what he is.
takin' all our sustenance,
like it was really his.
Greedy to a fault,
bully to us all,
he'll only be your friend so you can take the fall."