Western Animation / Hatch Up Your Troubles 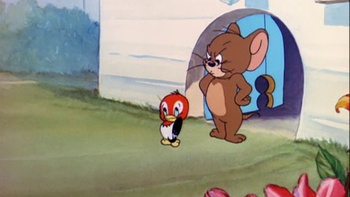 Hatch Up Your Troubles is a 1949 animated short film (7 minutes) directed by William Hanna and Joseph Barbera.

It's a Tom and Jerry short. This one starts out with neither the cat nor the mouse but instead a mama woodpecker sitting on her egg. The mother leaves the nest to get food and naturally that is the precise moment where the egg hatches. The egg falls out of the nest and through some impressive good luck rolls right into Jerry's mouse hole. Jerry pulls the egg shell off and the baby woodpecker calls him "mama!" Jerry finds the presence of the phenomenally destructive woodpecker chick inconvenient, but the woodpecker won't leave him. Eventually Tom notices the woodpecker chick and then both Jerry and the woodpecker have to save each other.

Received a near-identical remake in 1955 as "The Egg and Jerry".