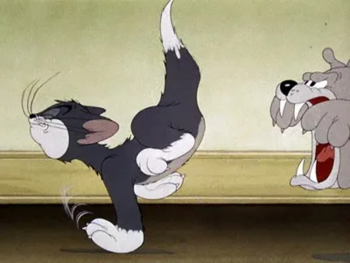 Dog Trouble is a 1942 Tom and Jerry short directed by William Hanna and Joseph Barbera. It is notable for being the debut of a grey bulldog who would later go on to be known as Spike.
Advertisement:

Tom is going about his usual day of toying with Jerry and chasing him around, but his fun comes to an abrupt halt when he accidentally provokes a bulldog who then proceeds to chase him around. Jerry is initially delighted at his nemesis being ambushed by the bulldog until the canine spots him and goes after him as well. Now the cat and mouse must put aside their differences in order to rid themselves of the vicious beast.