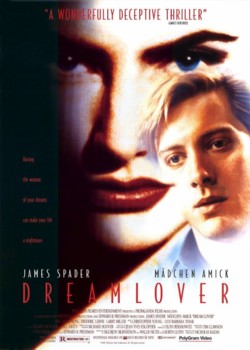 Successful architect Ray Reardon (Spader) has just come off a messy divorce. Though his friends push the joys of single life, Ray wants domestic bliss. Then he meets the beautiful, seemingly perfect woman Lena (Mädchen Amick) after he literally bumps into her at a party. As if by chance, they cross paths once more and move quickly from there. Soon they marry and have a baby daughter. However, Ray begins to pick up on strange things about his wife he noticed even prior to their marrying. Lena has a past life he doesn't know about, which he investigates to her displeasure. Yet the disclosure seems just a bump in the road and the couple go on to have another baby. Then events take an untoward turn, and Lena's true nature is finally revealed...

Trope examples from this film include: