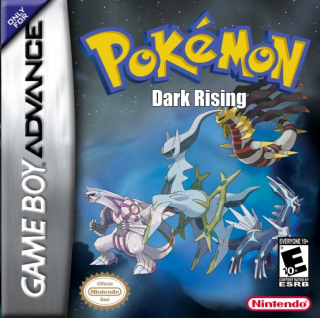 Pokémon Dark Rising is a Game Mod romhack of Pokémon FireRed created by DarkRisingGirl in 2012.

The game takes place in the Core region, you begin the game not by speaking to Prof. Oak, but Arceus! Arceus reveals you to be The Chosen One that must save him and the Pokémon world from an ancient evil.

Besides the main plot, you and your rival are about to start your respective journeys to become Pokémon Masters by defeating all eight Gym Leaders.

The game is Darker and Edgier that the regular series, and it loves to throw a Difficulty Spike or two at the player. Another noticeable aspect of the hack is the inclusion of Pokémon from Pokémon Diamond and Pearl and Pokémon Black and White, but without the Physical/Special attack split from these games.