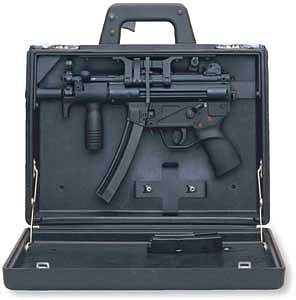 A gun concealed inside or in the shape of a briefcase.

Most of the examples under IKEA Weaponry pack away into a briefcase when disassembled, other than those deliberately disguised as something even more innocuous.

Turns out to be a case of Truth in Television. The CIA, as well as American government and military bodyguards, do actually use submachine guns concealed in cases (just like the one depicted). The case is built with a trigger on the handle that allows it to be fired without removing the weapon.

See also Senseless Violins, when weapons are concealed in an instrument case, and Handbag of Hurt, when the briefcase itself is used as a melee weapon.