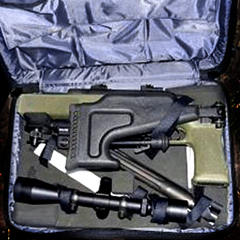 Now if only I knew the Swedish word for scope. Or barrel. Or customer helpline.note "Kikarsikte", "pipa", "kundtjänst".
Advertisement:

IKEA Weaponry is all about weapons which are usually left in kit-form until they are needed. Sniper Rifles are the best known version of these weapons thanks to the Lock-and-Load Montage that is often featured in some movies, but other types of weapons have shown up in shows as well. This is called a "takedown rifle" in real life, and, near as records can reflect, most of them are used by hunters who travel frequently rather than assassins. (As far as we know...)

It takes a special kind of weapon to be broken down like this, and it doesn't usually work the way Hollywood depicts it onscreen. A scoped rifle that is expected to hit anything must be test fired, adjusted, and tested again, a process called "zeroing". In order to work right after assembly, the scope needs to be either permanently fitted to the main body of the weapon, or fitted to a special mount that can be separated and rejoined precisely without interrupting the adjustments. The break-away barrel connection must likewise be gas-tight and accurate enough to put the muzzle back in the same exact place after assembly. The precision machining required is always hand work, mass-production need not apply, but there are specialist gunsmiths that can deliver. (This is becoming less true with the advent of finer machining and improved "quick detach barrels." See the Bushmaster ACR

This weapon is going to compromise some accuracy and power over a non-takedown weapon of the same type, but assassinations-by-scoped-rifle as seen in the movies are almost always over relatively short range, like a roof overlooking a street, on a highly-visible stationary target: an easy shot for a decent shooter, even if the sight is off by an inch or so.

Most traditional break-action (boxlock and sidelock) rifles and shotguns of the last 100 years or so are made to be easily assembled and dissassembled in 3 parts in a few seconds typically by pulling a single latch in the forend (some have a spring catch in their forearm, e.g. Winchester Model 37 so that it simply pulls off) and their sights or scopes are solidly fixed to the barrel and not the receiver, so the zero is not interfered with, so they fit the spirit of the trope by design.

Bifurcated Weapon differs from IKEA Weaponry in that bifurcated weapons are already weapons in their own right even before they are put together.

A Sub-Trope is the Scaramanga Special; where the parts needed to put the weapon together are disguised as different objects which may very well function as said object, eg: a pen, a pillbox or even a belt buckle.

It has nothing whatsoever to do with IKEA Erotica. We hope...