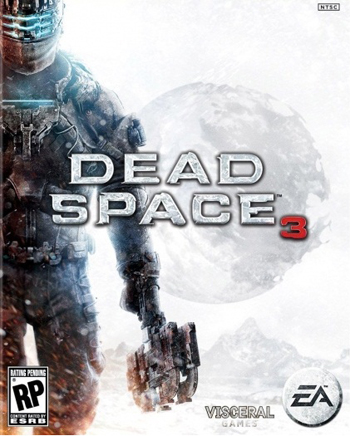 Take down the terror.
"I remember telling my college professor I wanted to study xenoarcheology. He laughed right in my face. 'There’s nothing to study,' he said. 'It’s all dead space. No alien life exists out in the universe.' In a way, I guess he was right..."
— Doctor Earl Serrano
Advertisement:

Dead Space 3 is the sequel to the critically acclaimed Dead Space 2 and the third Numbered Sequel in the Dead Space series, continuing the story of Space Engineer-turned-Action Survivor Isaac Clarke. This time, Isaac is coerced by the remnants of EarthGov to travel to the planet Tau Volantis and find the source of the Necromorphs, which is allegedly somewhere on the planet. Naturally, Isaac wants nothing to do with the mission, until he finds out his ex-girlfriend Ellie Langford has already gone to the planet to find the source.

Notably features drop-in drop-out two player co-op. The second player takes control of EarthGov Sergeant John Carver, a man who, like Isaac, has lost everything to the Marker and the Necromorphs.

The game also features multiple new locations, including the New Horizon colony, the 200 year old wreckage of a space fleet, and the snowy and frozen world of Tau Volantis. The game was released on February 5, 2013. The Awakened DLC was released on March 12, 2013.