"He looks like a walking pirate flag!"
— The Seep 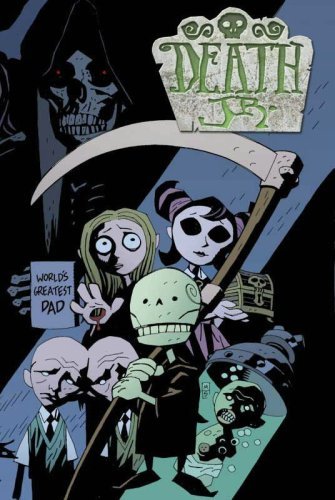 "None of us here are exactly normal." note Clockwise From Top left: Death, Stigmartha, Pandora, The Seep, DJ, Smith and Weston.
Advertisement:

Forget everything you thought you knew; it turns out that The Grim Reaper is actually a pretty nice guy. Sure; his job involves collecting the souls of the deceased, but he's also happily married, with a son, and enjoys spending quality time with his family. His son, the titular star of the series, is the same—but a great deal more naive.

Together with a Ragtag Bunch of Misfits who look about as bizarre as himself, Death Jr. goes on various misadventures (some of which he or Pandora Boxley arguably caused to escalate in the first place), with a good dose of humor and violence along the way.

Originally an action game by Backbone Entertainment released for the PlayStation Portable, Death Jr. was intended to branch out into its own massive, media-branching franchise, with the first adaptation being a graphic novel written by Gary Whitta, and illustrated by Ted Naifeh. While the video game received mixed reviews (the general consensus is that it delivers in the action department, but doesn't really take advantage of its universe to convey an interesting plot), the graphic novel was very well-reviewed, boggling to those people who barely even knew the game exists. Both the game and graphic novels received sequels, many an arguable improvement from their predecessors, although they didn't come close to pushing the series into the mass-franchise the creators had hoped. Perhaps out of realization that the PSP wasn't a big success, the series abandoned its original exclusive deals with Sony, and began to appear on Nintendo platforms. Unfortunately, when Backbone Entertainment was bought by Namco soon afterward, it seemed to force the franchise into limbo, but hopefully not forever.

Games in the Death Jr. series:

Books in the Death Jr. series:

Tropes found in the Death Jr. include: