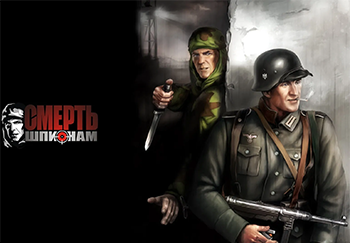 Death to Spies is a World War II era Stealth-Based Game where you play as Semyon Strogov, a Russian counterintelligence operative carrying out a series of covert missions against the Nazi troops. The game can in theory be completed through wholly-violent and stealth routes, and a large amount of weaponry can be taken with the player at the start. In practice, the guns-out routine is nigh-impossible due to the realistically large number of well-armed soldiers on every base you come across, and though still difficult, stealth is the way the game is meant to be played. It's also notable for its very large, non-linear levels.

The game had a sequel, Death to Spies: Moment of Truth, which expanded the player's arsenal and means of performing assassinations, and cleaned up various shortcomings of the original. In 2014, the developers attempted an unsuccessful Kickstarter campaign to obtain funding for the third game. Eventually they managed to fund the game, and they renamed Death to Spies 3 to Alekhine's Gun, which takes place in the Cold War.