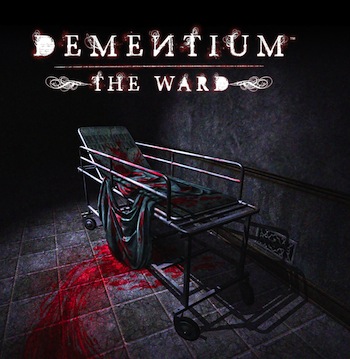 A Survival Horror game for the Nintendo DS portable system developed by Renegade Kid. You play as William Redmoor, a man accused of murdering his wife and subsequently condemned to an insane asylum run by the mysterious Doctor. One night, after experiencing a disturbing nightmare, Redmoor awakens to find the asylum deserted, blood covering much of the area, and the PA system droning about an emergency. It doesn't take long to realize that something has gone very, very wrong, and soon enough Redmoor is forced to fight for his life as legions of zombies and other monstrosities have invaded the asylum. It was remade for the 3DS in 2015, but missed a Halloween release due to publishing complications.
Advertisement:

A sequel was released in 2010. Having completed his very unpleasant brain surgery, Redmoor is transferred to The Doctor's main facility, Bright Dawn Treatment Center, to undergo "Phase 2" of his "treatment". Just as before, however, Bright Dawn becomes overrun with nightmarish demons, and once again Redmoor must struggle to finally get some answers from the Doctor, and escape with his life.

A HD port of the second game was released for PCs through Steam in December 2013. The basic engine and gameplay are the same, but the visuals have been noticeably upgraded (including replacing all the FMV movies with high-quality pre-rendered ones). Overall, the look is of a good-looking Playstation 2 game with current-gen lighting effects. There are also more notes scattered around expanding certain aspects of the story, and the Colossus boss fight has been updated to feature a corridor filled with deathtraps instead of a simple block maze. Despite all of the improvements, the game has LESS content then the original version, the level design is untouched aside from textures, and the game is riddled with game-breaking bugs.

In 2015, Renegade Kid got the rights of Dementium back, and re-made the first game for the 3DS, and immediately set out to remake the second one, as well as possibly create a third title. Unfortunately, the low sales of the remake, combined with other factors, caused Renegade kid to close its doors, and split into two separate companies, one, Atooi, who would be handling the 2D properties, and the other, Infitizmo, who would be handling the 3D properties, with Dementium included. This split delayed, but did not destroy any plans for a continuation of the series.

However, on September 17th, 2018, Gregg Hargrove, the founder and owner of Infitizmo passed away due to pancreatic cancer. With no word from the studio since, nor Atooi, the chances of a continuation are uncertain at best, and nonexistent at worst.