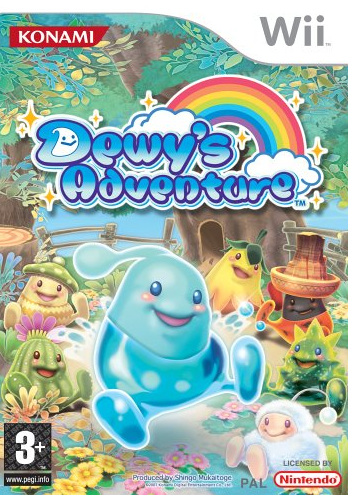 Dewy's Adventure is a peculiar Platform Game for the Nintendo Wii, released by Konami in 2007. Unlike most platformers, where the player controls the character as they run and jump, Dewy's Adventure has the player controlling the world itself, as the titular Dewy slips and slides along it. (This uses the Wii Remote's motion-sensing capabilities, natch.) Not unlike Sega's Super Monkey Ball series, but Dewy can also jump, attack, use special abilities, and even change forms, just like any other good platforming hero. It is one half of Konami's "storybook" duology for the Wii, alongside Elebits.
Advertisement:

The game takes place in a world given life by massive tree known as the Tree of Seven Colors, which is home to spirits known as Eaus that keep the balance of nature in check. Eaus are peaceful beings, but in times of strife, they have a protector: Dewy, an enchanted droplet of water who is summoned by the tree in times of need. The tree also has an old nemesis in the form of the Black Water: A sinister ooze that rains from the sky to poison the tree. As the latest chapter in this battle as old as time unfolds, the Black Water has managed to not only take all the Eaus hostage, but also steal all of the mystical Wonder Fruits from the tree. With the last of its strength, the manages to summon Dewy to combat the forces of the Black Water and reclaim all the fruits that keep nature in check.

Warning: Absurdly, mind-breakingly cute. Double warning: That special kind of cute that lulls you into a false sense of security.