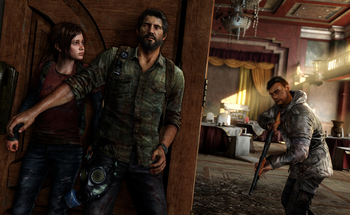 "Hiding from your enemies? That's not a game!"
— Anecdotal response to Hideo Kojima's proposal for the original Metal Gear
Advertisement:

In most video games, the player's character is powerful enough to mow down enemies left and right. They don't have to worry about setting alarms off, or enemy reinforcements being summoned (true, there are occasionally levels where you have to be a bit careful, but those are specifically scripted).

In a Stealth-Based Game, the player's character is simply too weak to survive a head to head confrontation with his enemies most of the time. Either it's too easy to die (many of the enemies can even be Instakill Mooks), you can't carry enough ammo, or there is some other reason. Just running away from enemies like in Pac-Man isn't enough to count as a stealth-based game; you need to be actively hiding from them.

Whatever it is though, they've got to be careful, stick to the shadows, kill silently, and only when necessary. And they better hide the bodies well because someone is going to stumble over them otherwise.

The different types of stealth used can be broken up as such, though many are often hybrids.

Games in this genre may feature Optional Stealth, where playing it stealthily is encouraged but not strictly necessary.

(1979). The Trope Maker is Castle Wolfenstein (1981), the first popular stealth-action game. And the Trope Codifier is Metal Gear Solid, which was the first 3D stealth game, having debuted in 1996 before releasing in 1998. The Metal Gear series is the Genre Popularizer, with its creator Hideo Kojima being the leading pioneer of the genre.

A sub-genre of Action-Adventure, as not only this involves active hiding, but the stealth itself is often puzzle-like, requiring knowledge of one's environment and enemy patterns for survival. For gameplay of this sort in other Video Game Genres, see Stealth-Based Mission.