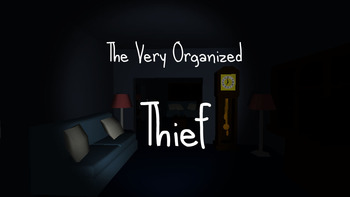 The Very Organized Thief is a stealth-based Unity game made by Redefinition Games, published on Kongregate

November 9, 2013. A remastered version is available to play online, and a remake for the game with more locations and items are in the works.
Advertisement:

You play as a thief. Who is very organized, as he has a list of things he wants to steal as he breaks into a person's empty house in the dead of night. The house is littered with props, and you have to collect the props listed on your randomly-generated list. While it seems like a typical neat scavenger hunt game, after a few minutes, you hear someone pulling up outside. The owner of the house begins patrolling his residence, and if he sees you, prepare for a No-Holds-Barred Beatdown.