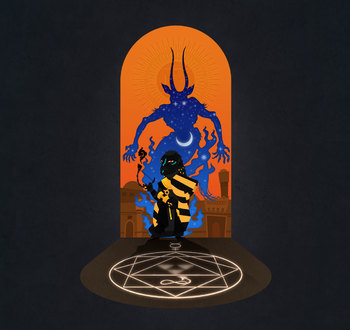 Qasir al-Wasat is a 2012 stealth action-adventure game developed by Aduge Studio and published by Zueira Digital in which you control an invisible creature. You have to carefully move from room to room while avoiding enemies, listening to conversations and solving puzzles. The creature can discreetly kill guards with a limited venomous attack, but fighting carelessly will lead to him getting splattered with blood until he can find shallow pools to clean it off.

The story takes place in Syria during the 12th Century. A sorceror named Farid ibn Abihi summons a creature known as Makhor into an interdimensional palace to assassinate three powerful guardians that have been unloyal to him. For this job Makhor would earn the legendary weapons of the guardians which all contain poisons the creature can metabolize, but before killing all guardians Makhor must seek information on how to travel between worlds on his own.

An "International Edition" was released in 2016 for Steam.