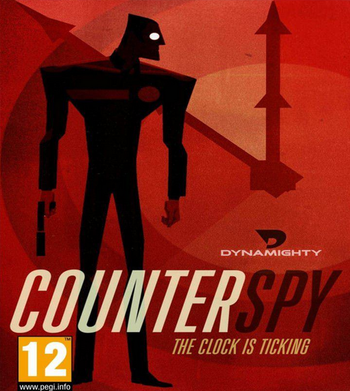 It's the time of the Cold War. The Superpowers are at one another's throats and both sides threaten to fire a nuclear strike at the moon in the constant bid to outdo one another. But at the middle of it all is C.O.U.N.T.E.R, who is working to put a stop to the nuclear launch plans on both sides and with it, the consequences of said nuclear strike.

CounterSpy is a side-scrolling Stealth-Based Game developed by Dynamighty and published by Sony Computer Entertainment for the Playstation 3, Playstation 4 and PlayStation Vita in August of 2014, with iOS and Android versions following one month later. In it, the player takes control of the unnamed and generally unidentified C.O.U.N.T.E.R Agent as he makes his way through the USA and Russia's military bases hunting for intel about the side's nuclear launches and subsequently trying to find a way to stop them. Should things get rough, you can always Take Cover! and pick off your aggressors one by one. But the main threat is each side's DEFCON rating. Suspicious guards radioing in, cameras spotting you and dying will all increase the DEFCON rating. If it increases past 1... well, you should probably hurry...

The game was met with fairly average to positive reviews. A lot of them criticised the gameplay, such as the procedural generation of environments and guards, as well as the short length, but praised the artstyle, soundtrack and general presentation that paid homage to 60s spy flicks.

LAUNCH COUNTDOWN STARTED! GET TO THE LAUNCH COMPUTER!