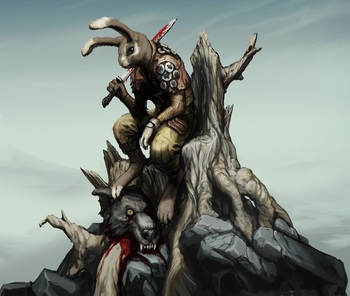 "There may be mothers and children in this den... And I'm not so sure that I care anymore."
Advertisement:

is a shareware action game developed by David Rosen when he was in high school, becoming the launching game for Wolfire Games

. The story follows a retired warrior rabbit named Turner, who, after finding his village destroyed by raiders and his family among the dead, swears to avenge his loved ones. Along the way, he finds a conspiracy that goes much farther than he expected.

Lugaru is a little bit like Usagi Yojimbo (with some nods to Watership Down and Redwall) in computer game form… Although there isn't much to the storynote Or so it seems, what really makes this game shine is the combat. Unlike most other fighting games, it relies less on button mashing and much more on timing your moves right

: the position and range of the enemy and the direction you're moving all influences what Turner will do with each attack, and all of the possible attacks are linked to a single button. The result is a remarkably fluid and responsive combat system, as this video demonstrates

It was originally made for the Mac, and has since been ported to Windows, Linux, and Amiga. On December 29th, 2008, a freelance graphic designer named Tim Soret updated Lugaru's graphical textures

; the updated version of the game is currently sold as Lugaru HD. On May 11, 2010, Lugaru's source code was released under the GPL license

, following the massive success of the “Humble Indie Bundle” charity drive. This opens the door to advanced modding capabilities and ports to new operating systems and portable devices. That being said, the game content is still closed, so you will have to register the game in order to play anything more than the Demo and downloadable mods.

After the unexpected success of Lugaru, David Rosen announced a sequel, then called Lugaru 2. However, his college work took up too much of his time, leaving the game's future uncertain. After finishing college, he, his brother John, and three friends began working on the game full-time and announced it as