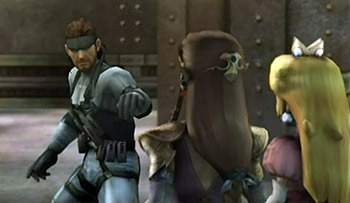 "And try not to get kidnapped for two friggin' seconds."
"If the Hero says 'wait here,' it really doesn't matter whether you obey him or not. If you stay, you will be captured by the Evil Overlord's henchmen as soon as the Hero is out of earshot. If you tag along, you will be caught by the Evil Overlord's henchmen as you stumble along. Don't agonize over your decision."
— The Normal Innocent Bystander's Survival Guide

Whenever our hero has to go off and do something important, they first decide to dump off any "dead weight" (such as cute sidekicks or Love Interests) that might slow them down by getting into trouble at precisely the wrong time. He'll tell the person something akin to "Wait here, if I'm not back in an hour, call the police."

If they listen to the hero, they'll get captured or Trapped by Mountain Lions the moment he's out of earshot. Half the time, they'll ignore the hero's advice and go off to do something incredibly stupid (and inevitably end up in hot water). You'd think they could take five minutes to call the relevant authorities, or failing that get one of the hero's peers to come help before doing something incredibly stupid, but noooo.

Occasonially, it's the hero who ends up getting in over his head. In this case, the buddy/girl will get to be the big damn hero for once and bail him out of a thrashing by the villain's goons. Cue An Aesop about The Power of Friendship when the hero complains about them ignoring orders.

Often parodied if the character being told to wait is incapacitated and thus unable to do anything other than wait. See Hero Harasses Helpers for when the hero rudely rejects the help of other characters to fight with him. See Most Definitely Not Accompanying Us when a junior character wants to come along but is told off (which rarely works). Not to be confused with Fine, You Can Just Wait Here Alone.

Bambi's mother tells him to stay put while she checks if the meadow is safe to visit.

Bambi's mother tells him to stay put while she checks if the meadow is safe to visit.