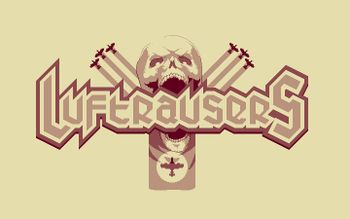 Luftrausers is a score attack dogfighting game made by Vlambeer and published by Devolver Digital. The main draw of the game is trying to rack up as much score as you can before you are inevitably shot down. Added into the mix are various combinations of weapon, body and engine to not only vary up the play styles, but also the missions to beat in order to unlock more parts, as well as the background music.
Advertisement:

Not to be confused with Luftrauser, a free flash game which Luftrausers is more or less a remake of.