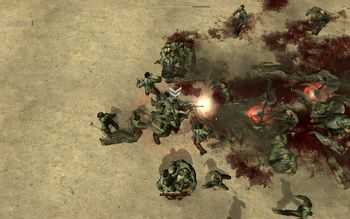 The rotting meat of the game, basically.
Nation Red is a top-down Shoot 'em Up, developed and published by Diezel Power and released in August of 2009 on Steam. It's set in a Zombie Apocalypse in the American Midwest. That's about it.
Advertisement:

It's very similar gameplay wise to those zombie survival flash games you see all over the internet, such as Endless Zombie Rampage 2. You use the WASD keys to move your character around the screen and aim and fire with your mouse. The depth comes from it's wide range of weapons and its perk system. You earn Experience Points by killing zombies, and upon a Level Up you can choose a new perk, such as faster reloading or health regeneration. You can potentially earn up to ten perks in Strategic Perk Mode- if you survive that long. In Random Perk Mode you can get as many as you can survive through, though the available perks per level up are random...as the name suggests.

The formulaic zombie-killing is divided into several game modes. There is a single-player campaign where you must kill a certain number of zombies in each level to proceed, as well as a free-play mode, a survival mode where you have no perks and only one gun, and "Barricade" mode, where you and a host of AI teammates must Hold the Line against waves of zombies. The game features local and online Coop Multiplayer in any of the above modes.