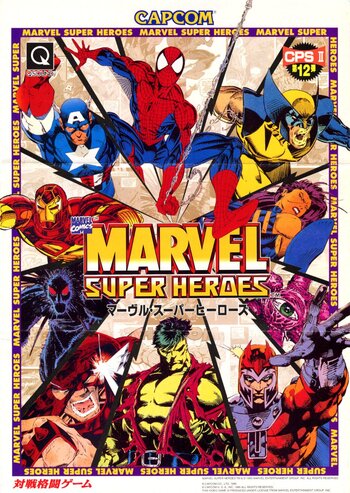 Marvel Super Heroes is the Spiritual Successor of X-Men: Children of the Atom. It was released in 1995.

The roster retained Wolverine, Psylocke, Juggernaut, and Magneto, from the previous game, and was diversified with the additions of Captain America, Spider-Man, Iron Man, The Incredible Hulk, Blackheart, and Shuma-Gorath (a Doctor Strange/Kull the Conqueror villain more people know about from these games than the comics). A secret character from Capcom's own character library, Anita (the little girl that accompanied Donovan in Night Warriors who fights on her own right here), is also present and continued the tradition set by Akuma in X-Men: Children of the Atom.

The game was based (loosely) on the miniseries The Infinity Gauntlet, and featured the Gems as power-ups that could be gained and used in battle. Each Gem had a different default ability, while each character had an affinity for a certain gem that would make them even stronger when they used it. After fighting the other heroes and villains for the Gems, the player faced down Doctor Doom, before trying to get the final gem from Thanos.

It was followed in 1996 with X-Men vs. Street Fighter.

Not to be confused with Marvel Super Heroes: War of the Gems, another Capcom-developed tie-in to The Infinity Gauntlet released in 1996.