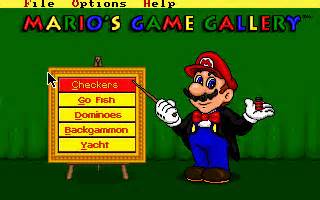 How about a nice game of... Checkers!

Mario's Game Gallery is an MS-DOS, Windows 3.1, and Macintosh game released by Interplay in 1995. As the name suggests, it's a compilation of games you play with Mario. There's five to choose from: Checkers, Go Fish, Dominos, Backgammon and Yacht.

In 1997, the game was re-released as "Mario's FUNdementals" under Interplay's "Brainstorm" division.