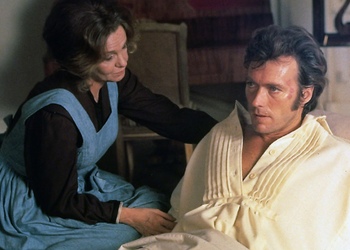 During The American Civil War, a wounded "Yankee" soldier is found by a group of women in a seminary, and taken in and cared for. The new presence of a man in a group of Catholic women creates all sorts of (sexual) tension, which leads to scenes of rivalry between the women. Add in the moral dilemma of taking in a soldier who fights for the wrong side, and the fact that the women are all in different stages of womanhood, and you get the powder keg situation that is The Beguiled.

There are two different film adaptations of the story, which was originally a 1966 novel by Thomas P. Cullinan. The 1971 film was directed by Don Siegel and starred Clint Eastwood as the wounded soldier. The 2017 film was directed by Sofia Coppola, and featured Colin Farrell as the soldier.

Both versions of the film contain examples of:

The 1971 film provides examples of:

The 2017 film provides examples of: