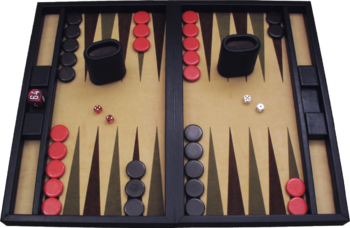 Backgammon is a Turn-Based Strategy tabletop board game, and having been invented 5,000 or so years ago in ancient Mesopotamia (modern Iraq), one of the oldest games in human history still being played.

At its heart, Backgammon is a contest between two players racing to take all their pieces off the board. More accurately, it's a match of in-depth strategy, attack, and defense, all while trying to appease the Random Number God. The use of dice in such a strategic game has left it somewhat less revered than its better-known cousin Chess — unlike Chess, in Backgammon, a total hack still has a chance of beating a world-class player. The flip-side of the randomizing element is that it has adds more excitement to the game, since a player can never figure with complete accuracy what his or her opponent will do on their next move. This inherent uncertainty has led Backgammon to be one of the oldest gambling games in history, in addition to being a strategy game.

Also, like Chess, there is a wealth of opening-game study and strategic treatises to be found, though not nearly to the same extent.

The game is played on a board marked with 24 points of alternating colors, grouped in four quadrants of six points each. Between the left and right sides of the board is a "bar" — a raised area that serves as an official out-of-play zone. On one side of the board will be slotted areas for the game pieces to exit the board during the end game. At the outset of the game, each player has 15 pieces (standard Checkers pieces are commonly used) distributed in a set pattern on the board, each side mirroring the other. A "doubling cube" is placed on the bar to indicate the current stakes of the game. Each player is given a pair of six-sided dice, and both roll one die of their pair; the player with the higher die roll makes the first move, using that combined roll as his or her opening. If the roll is a tie, the players pick up their respective dice and repeat the process until there is a clear winner.

Players then alternate rolling their dice, moving their pieces in accordance with the dice rolls. The pieces move in opposite directions — if your pieces are moving clockwise around the board, you will see your opponent's pieces moving counter-clockwise, and vice-versa. Once all of a player's pieces are in the last possible quadrant they can occupy, that player can then start removing pieces from the board. The first player to remove ("bear off") all his or her pieces from the board wins the game.

1) Any piece that is alone on a point (a "blot") can be landed on by an opponent's piece ("hit"), at which time the blot is immediately removed from play and placed on the bar. From there, the blot must re-enter the board on an open point in the player's farthest-away quadrant on a subsequent turn. The player cannot make any other move until all of his or her blots have re-entered play.

2) If a point is occupied by two or more of one color, only that color may occupy the point. In other words, if you have two of your pieces on a point, it's yours, and your opponent may not land there so long as that condition holds.

These two rules combine with the dice to make the player determine whether to leave a piece as a blot, whether it's a good move to attack an opponent's blot, and so on. If you move or attack recklessly, you'll leave too many blots in inconvenient places and you'll spend the whole game playing catch-up. If you spend the whole game being cautious, your opponent will speed by you.

The dice rolls should not be thought of as a single total, but rather as two separate numbers indicating the moves that the player has to make. For example, a 2-4 does not stand for six, but shows that the player has to make separate moves of two and four points. You may use both moves for a single piece, but you must be able to make them separately and legally. If you have a piece that you want to move, but the opponent has control of the points two and four ahead of it, that piece cannot move - even if the point six ahead of it is available.

If a player makes a roll, but has no legal moves, they lose their turn entirely. If a player can complete part of the roll, he or she must complete that part of the roll. A player also must make a complete move if possible, even if making a partial move would be more beneficial.

Any time a player rolls doubles on their dice, they get to use each die for two moves. For example, a roll of "5-5" means you can move up to four separate pieces five points each.

Speaking of doubling, the doubling cube mentioned earlier is a way to double the stakes the game is being played for. In "match play", this is like saying that a game is now worth 2 points instead of 1, 4 instead of 2, etc. In "money play", it doubles the per-point value of the bet for the winner. If a player believes he or she has a sufficient advantage, before his or her next turn, that player offers the doubling cube to the opponent, with the now-doubled stake facing up on the cube. If the opponent accepts the cube, the doubled stake is in play and the game continues. If the opponent declines the cube, that counts as a resignation by the opponent and the game ends immediately at the current stake. A player that has accepted a double can re-double later, and so on, as often as they like. note  The 64 on the doubling cube is only a limitation of the cube itself, not the rules. That said, it's very rare for games to go to 8x, and extremely rare for 16x, 32x, 64x, etc. It may even be to a player's advantage not to offer a double — if you have such a commanding lead that you think you can win a "gammon" or "backgammon", and the multiplier of the stakes such a win earns, offering the double only gives the opponent an opportunity to resign before the multiplier takes effect. Casual games often omit the doubling cube entirely. Winning a gammon or backgammon awards double or triple the current stakes, respectively.

On the topic of resignation, a player may offer to resign at any time, but the other player must accept the resignation at an agreed-upon stake multiplier, the multiple of which is determined by the game state. For example, if a player is currently winning by a margin of a backgammon and the opponent wishes to resign instead of furthering the pain, the player in the lead can demand resignation terms as high as a backgammon (but no higher). If the terms are not met, the resignation is refused and the game continues.

Of note, while the game is played worldwide, it has the strongest cultural resonance in its ancient home, the Middle East. To this day, backgammon is seen in the Middle East generally and the Arab World specifically as a distinctive aspect of the local culture, tied in with folkways going back millennia. Backgammon boards intricately inlaid with various woods and mother-of-pearl are not an uncommon sight in Middle Eastern households, even if nobody in the family actually plays. The game is also the stereotypical pastime of habitués of Middle Eastern cafés, played long into the night among friends as they drink tea and coffee, smoke hookah, and chat about whatever comes to mind.