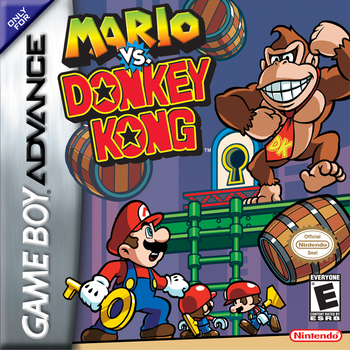 It's a new way to play an old arcade classic.
"Hey! Come back here, you big monkey!"
— Mario
Advertisement:

Mario vs. Donkey Kong is a series of platform-puzzle video games created by Nintendo Software Technology for Nintendo's portable systems, as well as the Wii U. The series started out as a Spiritual Successor to the original Donkey Kong arcade game, where Mario was out to catch the titular gorilla and keep him from causing trouble, but the gameplay soon went in a slightly different direction.

Nintendo 3DS Ambassadors have access to the original game as one of ten free Game Boy Advance games; incidentally, this means they can play every game in the Mario vs. Donkey Kong series on one system.

The series is notable for being designed by Americans, with its developer being Nintendo Software Technology Corporation (AKA NST), which is based in Redmond, Washington, like Nintendo's main American division.

Tropes found in Mario Vs Donkey Kong include: