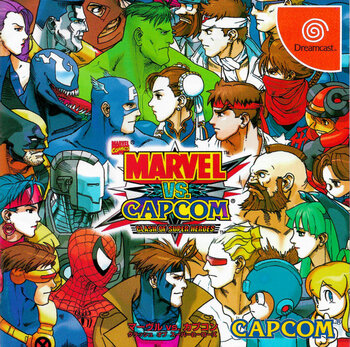 After the successes of X-Men vs. Street Fighter and Marvel Super Heroes vs. Street Fighter, Capcom released Marvel vs. Capcom: Clash of Super Heroes in 1998. The game's setting is based on the Onslaught storyline, with Professor Xavier calling for help from within the Capcom universe to help stop that specific villain.

MvC played mostly the same as its predecessors; it also added an extra Duo Team Attack mode (also known as a Variable Cross) where teammates would join together to beat down their opponent at the same time. The game also featured numerous assist partners—characters from both Marvel and Capcom who could be called on for supporting attacks. (This mechanic would be replicated, albeit with actual tag partners, in the following two Marvel vs. Capcom entries.)

Capcom followed this game up in 2000 with Marvel vs. Capcom 2. This puts MvC in the rather unique position of being both the finale of one trilogy (as started by X-Men vs. Street Fighter) and the first game of another (thanks to the Numbered Sequels that follow).

In 2012, the game was re-released for PlayStation Network and Xbox Live Arcade with Marvel Super Heroes in Marvel vs. Capcom Origins before it got delisted a few years after.

The game has the following characters: